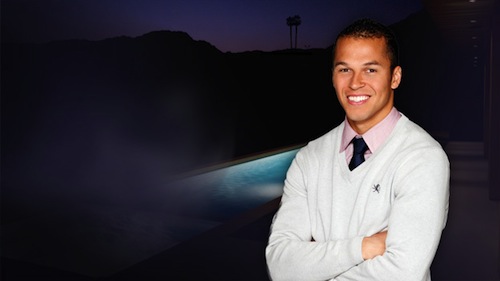 Minneapolis, Minnesota – Twin Cities educator and athlete Ryan Hoag has been cast in Season 3 of “The Bachelor Pad,” a reality television show on ABC. The Season 3 Premiere will debut on Monday, July 23, 2012 at 7:00PM (CST). Contestants on the show compete for a final prize of $250,000, a portion of which Hoag pledged to donate to Upstream Arts if he wins.

“We are honored that Ryan will raise national awareness for Upstream Arts through his participation on the show,” notes Upstream Arts Executive Director Julie Guidry. “It’s a wonderfully unique opportunity for a wider audience to learn about the important work that we do.” As a Teaching Artist with Upstream Arts, Hoag has brought arts education to hundreds of youth and adults with a wide range of abilities, including individuals with disabilities.

Ryan Hoag is a graduate of Gustavus Adolphus College, where he played football and obtained a degree in Elementary Education. Upon completion of his studies in 2003, he was drafted by the Oakland Raiders with the final pick and went on to play with five different NFL teams. Hoag is a dean at Minneapolis Roosevelt High School, coaches soccer and tennis, and has international representation as an actor and model. In 2008, he was a contestant on Season 4 of the ABC reality television show “The Bachelorette.” He has been a Teaching Artist with Upstream Arts since 2009.

Upstream Arts was founded in 2006 to enhance the lives of adults and youth with disabilities by fostering creative communication and social independence through the power of arts education. Teams of professional artists lead interactive, multidisciplinary activities in music, dance, visual arts, poetry, and theatre that explore emotion and examine the successful elements of social interaction and effective communication. The model has proven successful in giving youth and adults with disabilities much-needed exposure to the arts, while nurturing their ability to positively express themselves, participate in a group, and socially interact with peers, supervisors, and family members. For more information about Upstream Arts, please visit https://upstreamarts.org.